who is Prof Gabriel Ogunmola? 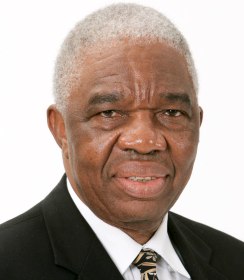 He rose through the ranks to become a Professor of Biophysical Chemistry at the University of Ibadan in 1980. Professor Ogunmola has been involved in international science research collaboration on Structure Function Studies, of Hemoglobins using a diverse technique of Fast Reaction Kinetics Thermodynamic and molecular spectroscopy. He was at Princeton as a Fullbright Fellow in 1974, to collaborate with Walter Kauzmann on High pressure studies and hydration of proteins, at California Institute of Technology as a Visiting Research Associate in 1974; with Professor Michael Raffery on F19 NMR Studies of Human haemoglobins at the University of California Berkeley as Visiting Assistant Professor in the Department of Chemistry, University of California, Berkeley collaborating with George Pimentel, Visiting Scientist to the Lawrence Radiation Laboratory, Berkeley in 1976; a Visiting Hill Professor of Chemistry and Laboratory Medicine, University of Minnesota Minneapolis in 1983.

Professor Ogunmola was appointed into the Endowed Chair of Olu Allinson Professor of Applied Chemistry in recognition of his achievements in Applied Chemistry in 1989. He was elected into the Fellowship of the Nigerian Academy of Science in 1981 and has served several times on the Council of the Academy. He served as President Nigerian Academy of Science from January 2003 to August 2006. He brought great developments to the Academy leading to its selection and participation in the ASADI programmes in collaboration with US National Academy. He has collaborated with many research teams nationally and internationally.

He directed the Laboratory of Biophysical Chemistry at the University of Ibadan, which was named as a member of UNESCO Global Network of Molecular and Cell Biology. He was elected into the Fellowship of the Sickle Cell Association of Nigeria in 1997 and Fellowship of Chemical Society of Nigeria, 1999. He was appointed a Trustee of the Fullbright Alumni Association of Nigeria in 2002. He was honored with a D.Sc. (Hon. Causa) from the Ladoke Akintola University of Technology, Ogbomoso in 2004, and Chancellor, Lead City University in 2008.

Professor Ogunmola has made significant contributions to knowledge in the studies of the relationship between structure and function and molecular pathology of the haemoglobins and in particular the molecular pathology of the prevalent sickle cell and haemoglobin C diseases. His noteworthy contribution in haemoglobin research has also been extended to the Physical Chemistry and Molecular Pathology of genetic variants of Glucose 6-Phosphate Dehydrogenase (G6PD) enzymes in the Nigerian environment. He has made major and scholarly advances on Biophysical Chemistry of Genetic materials, mostly erythroid and Proteins.

He has collaborated with many international scientists on sickle cell disease on both hemoglobinopathies, enzymopathies studies and structure-function correlation in biological macromolecule. For his research achievement, he has been cited as one of ten scientists for significant contribution to Science in Africa by American Association for the advance of science in 1991 In 2001 he published with Ohnishi, a seminal and innovative paper in ‘nutrition’ on the strategy for sickle cell management, classified as a major research result from bench side to bedside using ‘antioxidant cocktail therapy’ based on compensating for red cell injury in sickle cell disease.

Professor Ogunmola helped wrote the implementation plan for the first National Science Policy for Nigeria in 1988 and participated in the development of a new Science Policy debate for Nigeria in 2011. He has contributed immensely to the development of the scientific enterprise and the image of the discipline of Chemistry and Science in Nigeria. As President of the Nigeria Academy of Science, he forged much international agreement and linked with many academies and served on the Executive committee of IAP and contributed to the working programs of NASAC and Africa Science Academy Development Initiative (ASADI).

Professor Ogunmola served Ogun State Government as Chairman Olabisi Onabanjo University Teaching Hospital, Sagamu, 2004 – 2007. He served as a member of governing council of National Agency for Science and Engineering Infrastructure, Abuja 2003 – 2006. Member, Honourary Presidential Advisory Council on Science and Technology to the President of Nigeria, Chief Olusegun Obasanjo 2005 – 2006. He has been Chairman of the International Council for Sciences (ICSU) Regional Committee for Africa since 2004 – 2010. He is currently Chairman, Board of Trustee and Chancellor Lead City University, Ibadan.